Skip to content
Home>Recordings>Freddy Cole: He Was the King (High Note , 2016) 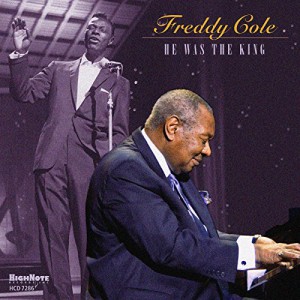 Singer and pianist Freddy Cole has come full circle. One of his early recordings contained a well-penned response to what must have been a deluge of comparisons to his legendary brother, Nat “King” Cole. I’m Not My Brother, I’m Me was a heartfelt and witty finger in the eye to the wags who simply couldn’t separate the two. It set the tone for Freddy’s distinguished career of establishing his own voice in what must have been the most daunting of challenges.

For at least a couple of decades, Cole the younger has been warbling his way through a songbook that Nat would have applauded but likely avoided. His choices are tasteful, if not earth-shattering. With He Was the King, Freddy has buried the sibling rivalry axe.  He’s gone so far as to take on a few of Nat’s signatures, “Mona Lisa,” “It’s Only a Paper Moon” and “Sweet Lorraine.” Fair enough, but kudos to Cole on the other choices that only a die-hard Nat devotee may be able to connect.  With Natalie gone and Freddy aging, this may be the last of the Cole legacy.