Known for his original piano arrangements and new compositions that often sport quirky time signatures as well as his vocal interpretations, during the past year Larry McDonough presented a very popular show celebrating the music–instrumental and vocal– of Chet Baker. The show originated at Jazz Central Studios, appeared later at the Dakota, and has enjoyed a few other performances. Now Larry returns to Jazz Central on Thursday, February 25, 7:30-9:30 pm, to celebrate the two recordings of legendary pianist and composer Bill Evans and vocalist Tony Bennett. 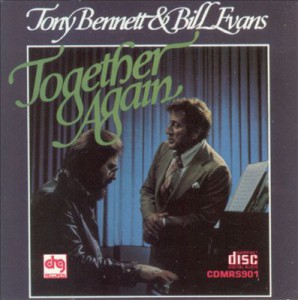 Evans rarely performed with singers, thus the release of The Tony Bennett Bill Evans Album in 1975 was big news. The album included pieces each had done separately, such as “Waltz for Debby” (Evans) and “The Touch of Your Lips” (Bennett). In 1976 they returned to the studio to record Together Again, released the following year.  Both albums showcased Evans’ skills as an accompanist, while adding the complexities that exemplified his solo and ensemble performances, as well as highlighting Bennett’s expressive range from bold and commanding to soft and delicate. Unfortunately, the rising popularity of the jazz fusion of Chick Corea, Herbie Hancock, Weather Report, Miles Davis, John McLaughlin in the mid-70s pushed the Evans/Bennett recordings into the background of the jazz scene. Evans has now been gone more than thirty years, but Tony Bennett, at 89, continues to perform, releasing highly regarded albums in recent years with Lady Gaga and, in 2015, with Bill Charlap on the Grammy-winning duo tribute to Jerome Kern (The Silver Lining). Perhaps the success of the latter will rekindle interest in the Evans/Bennett recordings, and Larry McDonough will certainly add to that interest with his show at Jazz Central.

However, Larry notes that “this is not a traditional tribute show where musicians imitate great artists. No one sings like Bennett and no one plays like Evans. Each piece they recorded together will be presented with beginnings similar to the recorded versions, but where they go from there cannot be predicted.” Larry will take on the challenging roles of both Evans and Bennett to educate younger listeners about these great artists and to remind seasoned listeners of this pair who never recorded “together again.”

Joining the party at Jazz Central will be Larry’s Quartet –Richard Terrill on saxes, Greg Stinson on bass, and Dean White on drums, with Larry’s daughter Rosie sitting in on African drum.

Larry McDonough first studied piano in fourth grade, added some vocals and gravitated to neighborhood garage bands in junior high, and was already gigging around town as a high school student in Bloomington, MN. Earning a degree in music education at the University of Minnesota, he had the opportunity to play both piano and trumpet in student ensembles with legends Clark Terry and Thad Jones, and in concerts for President Nixon and the President of Mexico. Through the late 1970s and early 1980s, McDonough worked as a part-time band instructor at Bloomington and Minneapolis high schools, and played in a number of Twin Cities’ bands, ranging from jazz to pop and polka.  He also performed in his own duos and trios, appearing regularly at the old Night Train club in St. Paul and at Jax Café in Minneapolis.  Concerned that his music career was taking him too far from the “real world,” McDonough enrolled in the William Mitchell College of Law in St. Paul, initially attracted to environmental law but then falling in love with legal aid work. After a few years away from music, he began giving some limited performances, but remained focused on his family (three daughters) and his career with Legal Aid.  Currently, Larry directs pro bono legal services for the poor at Dorsey & Whitney.

Music has pulled McDonough more into the public arena since the late 1990s. He began playing publicly again in solo, duo and trio formats, and with the popular fusion group, Bozo Allegro, and with (among others) the Wolverines and vocalists Patty Peterson, Shirley Witherspoon, Connie Olson, and Vicki Mountain. He also shared the stage with bop sax legend Benny Golson and trumpeter Duane Eubanks, and was inducted into the Minnesota Rock Country Hall of Fame for his work in the group Danny’s Reasons. Among a number of diverse projects, Larry has been involved with Fingersteps, a program in which children with disabilities write melodies and perform music using adaptive computer hardware and software. A composer since high school, Larry currently puts his writing skills to work by composing and arranging music for school music programs, ranging from small groups to concert and jazz bands, exposing young musicians to his “offbeat” harmonies and rhythms. Larry has a number of recordings including solos (Small Steps and Tuscarora), the duo with Richard Terrill, Solitude, and several with his working quartet —Simple Gifts, Angels and Kings/My Favorite Things— which showcase his ability to turn time inside out and maintain harmonic integrity. Further, his feathery touch recalls Bill Evans but with more fingers; his left hand alternately propels and sings; his dazzling two-handed runs display clear articulation from every digit.

Richard Terrill, tenor and soprano sax, has performed with Larry McDonough for nearly 15 years. He also has performed locally with guitarist Jim McGuire and with Chaz Draper’s Uptown Jazz Quartet.  As a student at the University of Wisconsin-Eau Claire, Dick performed regularly with the Lyle Mays Quartet, and later with Geoffrey Keezer. In addition to his work as a musician, he has published collections of poetry (Coming Late to Rachmaninoff–winner of the 2004 Minnesota Book Award for Poetry, and Almost Dark) and a jazz memoir, Fakebook: Improvisations on a Journey Back to Jazz. Dick teaches creative writing at Minnesota State University Mankato.

Bassst Greg Stinson has been the bassist in the Century College Jazz Ensemble for more than 25 years. He also plays in the CC Septet, Shorn Hortz Quintet, Paul Berger Trio, the St. Croix Jazz Ensemble, and regularly subs with the Nova Contemporary Jazz Orchestra, Classic Big Band, and Cedar Avenue Big Band. Greg also is an active composer and arranger for area ensembles and big bands, as well as churches and school groups.

Dean White played in various working bands while attending the University of Wisconsin, Superior. After graduating with a Bachelor’s degree in percussion performance, he moved to Hollywood, California to attend Musicians Institute College of Contemporary Music. Half-way through the first year, Dean was offered a main showroom gig at the Imperial Palace in Las Vegas. He was the first drummer in the Legends In Concert Show that still performs in various incarnations across the country today. Since settling back in the Twin Cities, Dean has performed with the Good, the Bad and the Funky; the Autobody Experience; Century Big Band; Nova Jazz; Big Time Jazz Orchestra; the Shorn Hortz jazz quintet; Power of 10; Jack Knife and the Sharps; Tubby Esquire; Hennessy Brothers jazz; and many others.

Rosie McDonough has performed music since her early years both with her father, Larry McDonough, as well as with Highland Friendship Club, a social group she attends for adults and children with disabilities, and the St. Paul Bridge View and Focus Beyond, public schools she attended for persons with disabilities. She now works at TSE, a nonprofit company that supports people with developmental and other intellectual disabilities. Her present musical focus is on African drum.

The music. In the first set, Larry will perform a sample of pieces from the two albums, each beginning with just voice and piano and other members of the ensemble joining throughout the piece. Selections will include “The Touch of Your Lips,” “Some Other Time,” “My Foolish Heart,” “Waltz for Debby,” “Make Someone Happy,” “You Don’t Know What Love Is,” “You’re Nearer,” and “You Must Believe in Spring.” In the second set, Larry will add pieces that Evans and Bennett recorded separately but never together, including “We Will Meet Again,” “Nature Boy,” “My Romance,” “How Insensitive,” “Night and Day,” “Detour Ahead,” “I’ll Be Seeing You,” and “I Will Say Goodbye.”

Perhaps Evans and Bennett would have recorded these songs together if Evans had lived longer. Come see and hear what they did and what might have been.

Jazz Central Studios hosts vocal jazz every Thursday, and live jazz every Monday through Friday at 407 Central Avenue SE in Minneapolis. A nonprofit organization, Jazz Central asks for donations ($10) to support the musicians and venue. Full schedule at http://jazzcentralstudios.org