Launched just a few years ago under the leadership of drummer/composer Lars-Erik Larson, Mancrush has become a popular and formidable ensemble on the Twin Cities jazz scene, playing everything from folk tunes to Bartok, as well as Larson’s eclectic original compositions. With Bryan Nichols on keyboard, Brandon Wozniak on tenor saxophone, and Zacc Harris on guitar, Mancrush released its debut recording last spring. Authentic Midwestern boasts Larson’s penchant for melding the influences of folk music and modern minimalism with 21st century jazz improvisation–engaging melodies atop simple harmonies with a strong sense of ensemble collaboration. That collaboration now comes to Thursday Night Jazz at Reverie on March 2, 9 pm.

Larson notes that Mancrush originated as a one-off at the Jazz at Studio Z Winter Jazz Festival in 2014. Still relatively new in town, Lars was approached by Jazz at Studio Z curator Zacc Harris, “to put together a set of Young Lions’ music…he asked me who I wanted for the band, and he set it up.” The chemistry and the music propelled this one-night stand into an ongoing, popular ensemble that has performed at Studio Z, the Black Dog, Nicollet, Icehouse, Vieux Carre’ and more.

Lars-Erik Larson is a drummer and composer based in St. Paul. Larson earned his Master’s Degree in Jazz Studies from the University of Illinois (Champaign-Urbana), where he studied with renowned drummer Dana Hall. After completing his degree in 2012, he moved to the Twin Cities where he has played with many local bands, including the No Coast Quintet, Zacc Harris Trio, the Thomas Nordlund Group, Bryan Nichols’ Trio with bassist Cody McKinney, and Zacc Harris’ trio, American Reverie . About two years ago, he opened an evening at the Black Dog with the debut of Ramtrack, a trio with guitarist Nordlund and trumpeter Jake Baldwin. The new Mancrush album features compositions Lars has written over the past two years, and he is busy writing new material for the band.

Pianist Bryan Nichols returned to his native Minnesota after studies at Iowa State and gigging in Chicago. A member of the 2004 edition of Betty Carter’s Jazz Ahead (“Jazz Stars of Tomorrow”), he performed at Kennedy Center in Washington, DC. He’s played with Ari Brown, Maurice Brown, Von Freeman, and more, and has taught at the MacPhail Center for Music and University of Wisconsin-Eau Claire. Locally Bryan is heard with his own trios, quintet and large ensemble, We Are Many; and has performed with the Zacc Harris Group, Nichols/Bates/Bates, Gang Font, vocalist Nancy Harms, drummer Dave King, Jeremy Walker’s Atrium Jazz Ensemble, and other cutting-edge artists. He’s a frequent duo performer on weekends at the Icehouse. Bryan was a 2010 recipient of a McKnight grant and released his quintet album, Bright Places, in 2011. His solo album Looking North was released last spring on Shifting Paradigm Records. 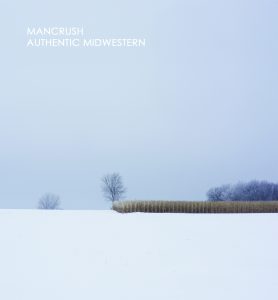 For the Mancrush debut album, leader Lars-Erik Larson selected 10 original compositions and an arrangement of Bartok’s “Five Hungarian Folk Tunes, No. 1.” The influence of Bartok as well as world and American folk melodies–roots of the American Midwest– can be heard throughout the set, along with the vibe of modern rock, pop and improvised musics. The opening track (“Ghosthunter”) sets the stage, starting out with driving drums pushing the keyboard as if the start of a circus soundtrack that soon shifts into engaging, dream-like passages that echo Debussy or Ravel, ultimately moved into the 21st century by Wozniak’s wandering, soaring tenor. The closing “Don’t Be So Sure” completes the dream. In between we’re given strong melodies that could support pop lyrics (“High Off the Hog,” “Your Green Thumb Is Showing”) or cartoon features via head-bobbing folky rhythms (“Heg”). The arrangement of Bartok’s “Hungarian Dance No.1” offers a whirling dervish of East Euorpean harmonies, with Larson’s assertive punctuations particularly effective.  The sweet melodies and lazy motion of American folk and country inform “They Call Me a Friend of the Golden Dogs” and “Love Now,” the latter with Wozniak at his most melodic and soulful, while the saxophonist’s slippery sweet tenor complements Nichols’ elegant keys on “Late Nights NE.” The tenth of the eleven tracks, “Pink House” seems to draw on many of the elements of the previous tunes, from soft rock to folky Americana and another showcase for Wozniak.

In all there’s some old-fashioned sweet melodies and Old World harmonies here, yet the quartet brings it all together with the drive and invention of modern improvisers. Don’t be fooled by how easy this is to listen to — “don’t be so sure.” There are a lot of layers of sound, and art. Maybe that’s what makes this music “Authentic Midwestern.”

Mancrush performs at Reverie, located at 1931 Nicollet in south Minneapolis, at the corner of Nicollet and Franklin. The Thursday Night Jazz at Reverie series is curated by Steve Kenny,  presenting cutting edge music most every Thursday night — full schedule at www.thursdaynightjazzatreverie.info.  No cover but tips ($10 suggested) appreciated to support the series and musicians. Reverie offers beer, wine and a full vegetarian menu.