“I am the music. I am my first instrument and the music is in me” –Rodney Ruckus 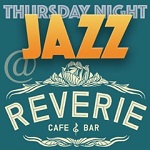 Thursday Night Jazz at Reverie and Saturday Night Jazz at the Black Dog will provide the venues for significant jazz commotion this week when the Rodney Ruckus brings ensembles to the bandstand for the headliner sets on July 28 (Reverie) and July 30 (Black Dog).  To say that the young drummer has been creating a “ruckus” would be an understatement, from gigs from one end of the Metro to the other, including a main stage performance at the 2016 Twin Cities Jazz Festival.

A Florida native, Rodney started playing drums at the age of two in church, and also picked up piano and bass. “As a child, I had no video games,” says Rodney. “Instead, I had musical instruments. I was willingly brought up to be engaged into music twenty-four/seven.” Rodney was introduced to jazz at age 14 in his middle school music program after moving from Miami to Sarasota, FL. With some friends, he started playing for tips outside neighborhood markets. Later, his band The Jazz Juvenocracy raised money to travel, playing at the Montreux Jazz Festival, Jazz a Vienne and at La Barington Jazz Club in France, and at the Umbria Festival in Italy.
Rodney attended the Berklee College of Music on a full scholarship, and was selected as drummer for The Grammys in the Schools Foundation. After completing studies at Berklee, he received an Art Blakey Jazz Messengers Presidential Scholarship to the McNally Smith College of Music. He’s been on stage with such jazz luminaries as Tia Fuller, Ralph Peterson, Herbie Hancock, Billy Childs, John Patitucci, Joe Lovano, Roy Hargrove, Wynton Marsalis, and Charles Lloyd. Locally, Rodney has performed with the Solomon Parham-Steve Kenny Quintet at the 2016 Winter Jazz Festival, with the Steve Kenny Quartet on Saturday Night Jazz at the Black Dog, with Anthony Cox’s Open Range Quartet at the Black Dog, and heading is own ensembles at Jazz Central Studios, Reverie and more. He’s also appeared with Solomon Parham at The Bedlam.

Trumpeter Aaron Janik is a native of Massachusetts, graduate of the Oberlin Conservatory and currently resident of Detroit who has studied with Sean Jones and the late Marcus Belgrave. Currently Janik teaches in Detroit and tours with such artists as First Lady Faith Evans, Dewele, Kierra Sheard and jazz legend Robin Eubanks. He’s joining The Ruckus for a series of special shows.

Alto saxophonist Jabari Powell recently relocated to the Twin Cities from Chicago, where he studied jazz at Columbia College. He’s been a regular participant in “Solomon’s Sessions,” led by Solomon Parham at the Bedlam, as well as performing with Pippi Ardennia, Steven Hobert, and more.

Pianist Will Kjeer has a long resume for such a young musician, performing with Steve Kenny’s Group 47 since his senior year of high school as well as leading his own ensembles. He spent a year in the post-high school program at Interlochen Academy before moving into college jazz studies at Cal Arts last year. He will enroll at McGill University in Montreal in September after completing a long list of summer gigs from Jazz Central to the Black Dog to Vieux Carré to the All Originals series at Studio Z, appearing with The Ruckus, Hoaxer, Group 47 and more.

Bassist with the Americana Classic Jazz Orchestra (devoted to the big band music of the 20s and 30s), JazzMN Orchestra, and leader of his own quartet, Ron Evaniuk recorded with Twin Cities trumpet legend Gene Adams and has played with George Avaloz, in addition to his long-standing work with Eric Gravatt’s Source Code.

Haylee Dee (Thursday Night Jazz at Reverie) is the vocalist for Saint Paul soul and blues super-group Steve Sullivan and The Factory, the alt-country duo Bumblebee Whiskey, fusion pop cover group GoldMine, a featured vocalist in The Ruckus Lab, and a member of the Contemporary Vocal Ensemble at McNally Smith College of Music where she currently studies Vocal Performance. In addition to performing and writing, she is currently the Vice President of Twin Cities Catalyst Music, a nonprofit and performance venue that creates opportunities for music and young people.

Not enough Ruckus for you? Rodney and company, with Jax Ravel on bass, turn up again on Monday, August 1, at Jazz Central Studios (8:30 pm).

While The Ruckus headlines both Reverie and Black Dog nights, both venues also host early sets –VVG (Very Very Groovy) at Reverie and the Steve Kenny Trio at the Black Dog.

Steve Kenny Trio (Black Dog) is sterling ensemble led by Reverie and Black Dog series curator Steve Kenny, one of the metro’s jazz giants of trumpet. Actually his instrument is a hybrid trumpet and flugelhorn, a FLUMPET™.  Kenny also curates the summer-long All Originals Jazz series at Studio Z, as well as leading multiple editions of his trio and quartet, the Illicit Sextet and Group 47. Joining Kenny on the bandstand will be young bassist Charlie Lincoln and somewhat less young drummer Cory Healey.

Thursday Night Jazz at Reverie takes place at 1931 Nicollet Ave (at the corner of Franklin and Nicollet), formerly The Nicollet. Weekly schedule available at www.thursdaynightjazzatreverie.info. Saturday Night at the Black Dog takes place weekly at 308 Prince Street, in the Northern Warehouse in Lowertown St. Paul. Schedule at www.saturdaynightattheblackdog.info. There is no cover at either show but tips ($10 suggested) are appreciated to support the musicians and the jazz series.