The drummer perches behind his red Gretsch with the posture of a finishing school graduate. His sticks are small, and he balances them on his fingertips. An array of hand hammered Turkish cymbals surround him. The man looks like a jazz musician ought:  He favors newsboy caps, ties with wild patterns, pastel shirts, tweedy sport coats. Red framed glasses kick the hipness up a notch. None of it looks contrived or phony. Before the music begins, one gets the impression this is a drummer who knows his business. And he does. The drummer’s name is Jay Epstein.

As the Chris Lomheim trio gets underway, one notices how the sound of Epstein’s ride cymbal. Smoky. And the pattern he’s playing creates a cushion for the players. His groove is more atmospheric than greasy. Crisp would describe part of it. Jay bites into the beat yet keeps the feel relaxed, a rare talent. It’s a breezy, accommodating rhythm, yet keeps an edge. When the bassist begins to solo, Epstein puts away the sticks and the shush and spit of his brushes seems to emit sparks.

Accommodating. Sympatico. Accuracy. An aphorism printed with a Sharpie atop of one of his snare drums reads “Precision beats power; timing beats speed.”  Those values do much to explain why Jay Epstein is the go-to sticksman for a goodly portion of the Midwest’s top jazz ensembles. The newly minted 75-year old–who looks half his age– juggles a schedule that would be the envy of any jazz musician. At present, Epstein backs Red Planet, Framework, Firebell, Tall Tales, Gypsy Jazz, and the Andrew Walesch Big Band. He often plays with piano or guitar trios at the Lexington, and regularly tours Europe with piano great Bill Carrothers. He’s recorded close to 50 albums and cds. And Epstein has maintained this frenetic pace for over a half century. 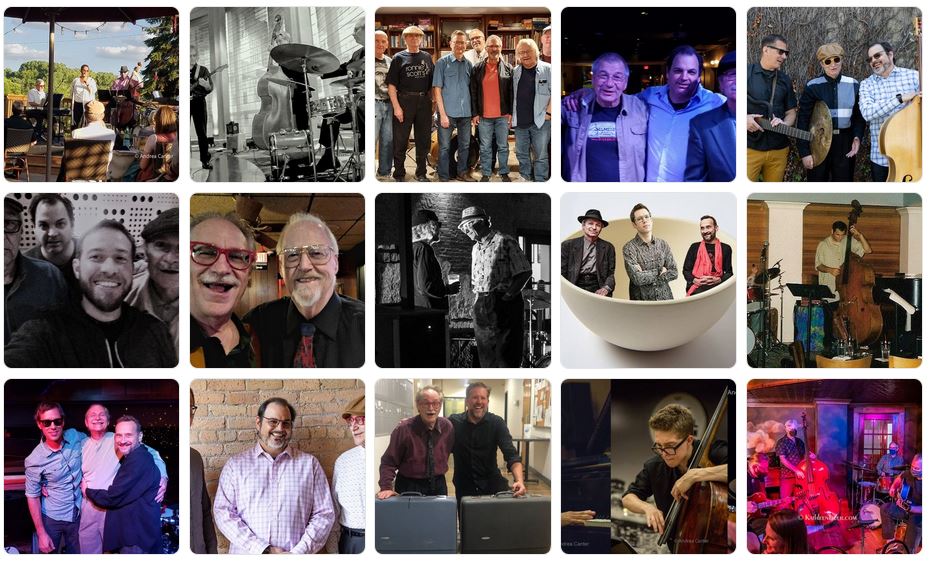 “Jay plays exactly what the music calls for,” said pianist Bill Carrothers. “He makes his style fit the music.He can back up singers, power up a big band, plays great latin music. And those things other than sticks he sometimes uses, those bundled things–I think they call them rods. He uses a lot of that stuff, which always compliments the music. Jay’s got all the ingredients.”

His resume drops the names of many of the greats in jazz. A partial list includes: Manfredo Fest, Sarah Vaughan, Richie Cole, Joanne Brackeen, Kenny Werner, Toots Thielman, Eric Alexander, Avaishi Cohen, and more. He also carries rock and roll cred, having played and recorded in Gypsy, back in ‘69-70, a band that bordered at the edge of the “big time” as it logged a solid year playing LA’s legendary Whiskey A Go Go.

“My secret, if I have one,” says Epstein, “is that I’m obsessed. I’m obsessed with the music, the drums, and the groups I perform with. I love making music, and I love the musicians. Performing never gets old for me. And I take none of it for granted. I’m grateful and lucky to have spent my entire working life just playing drums.”

All right.  But a man could be obsessed with music and still stink as a performer. Talent and skill are necessary.  And the musicians Epstein plays with can testify to his talent and skills.

“Jay plays with incredible sensitivity to the music and the musicians he accompanies,” says pianist Chris Lomheim, in whose trio Jay regularly drums. “He’s mastered many aspects of playing jazz that some drummers don’t bother to develop. For instance, Jay is an absolute master of the brushes. He also has the knowledge. He knows the history of the music, and  it informs his style. Another standout feature is Jay’s artistry at the cymbals. He gets an array of  textures out of them that is startling.”

Energy is another aspect mentioned in his bandmate’s remarks. The consensus points to a musician that makes the Energizer bunny look like a layabout. “He’s a catalyst, ” said bassist Chris Bates, a longtime collaborator. “Jay’s always wanting to play. When I began playing with him, fresh out of college in the early 90s, we’d practice at Jay’s house with guitarist Dean Granros. This continued for a year before our first gig. Jay’s always organizing groups of musicians in order to discover new sounds. He’s always searching out new musical directions.” 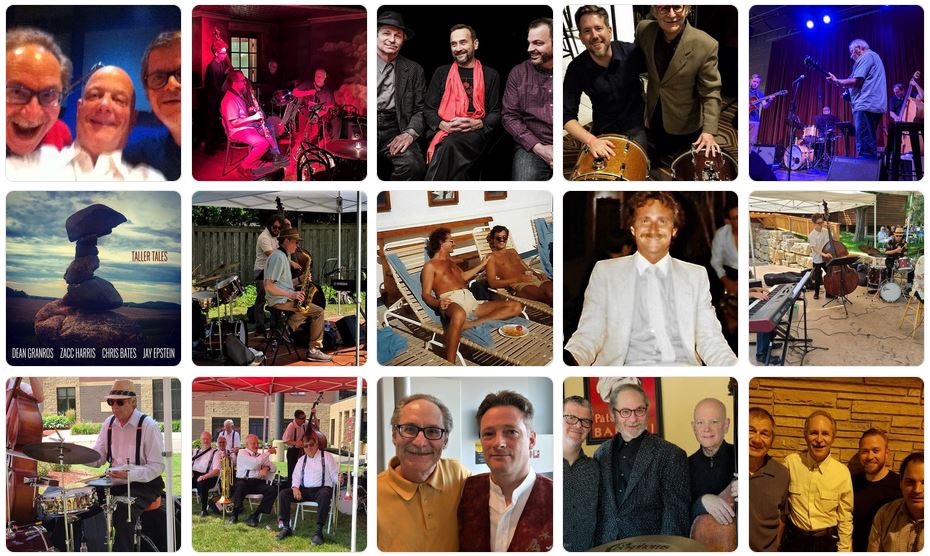 Speaking of energy, schlepping a drum kit to and from performances has always been laborious, time-consuming, and bad on the back, even with the smaller kits jazz drummers play. For a 75-year old who does it close to every day, it’s herculean. But Epstein is fit, trim, has no physical maladies. And he hauls his drums around as spryly as a drummer half his age.

“Jay has never lost the fire and enthusiasm that we all had when we were young,” added Lomheim. “ I really don’t know what his secret is. Sometimes, we’ll do a gig, and everyone’s tired, ready to go home and click on the television. Meanwhile, Jay’s packing his drums, headed to yet another gig.’

“Well, I do exercise. Nothing too heavy or serious. I do a lot of yoga stretches, avoid red meat, and I’m also  pretty big on taking naps.  I try to be organized about moving my gear.  I have a light cart that can haul the entire kit. Instead of a big hardware case, I pack those items in three small suitcases that keep the lifting light.”

Epstein’s musical story begins in 6th grade elementary band, in Winona, Minnesota.  A pair of sticks, a practice pad, the band instructor’s tutelage via a snare drum book (Haskell Harr, the boringest drum primer ever laid to paper) launched the adventure. Most unusual, the  fledgling drummer was enchanted by jazz nearly from the start.

“Well,  I came from a broken home,” said Epstein. “ My parents divorced when I was twelve, and my mother had to go to work. My brother and I became latchkey kids. But the band director  at my high school, Fred Hyer, took me under his wing. In fact, I spent so much time with Fred and his family I considered his kids my brother’s and sisters. It was Fred who exposed me to Miles Davis. The albums were ‘Kind of Blue’ and “Miles Davis Live at the Blackhawk.” Miles’ drummer Jimmy Cobb was my idol. I also loved dixieland music, especially Pete Fountain and his drummer, Jack Sperling. On one occasion, my mother took me to  hear Louis Armstrong at the Mayo Civic Center, in Rochester. That was really something. So, for me, it was the love of jazz early on.  In fact, I thought rock music was dumb and contrived.” 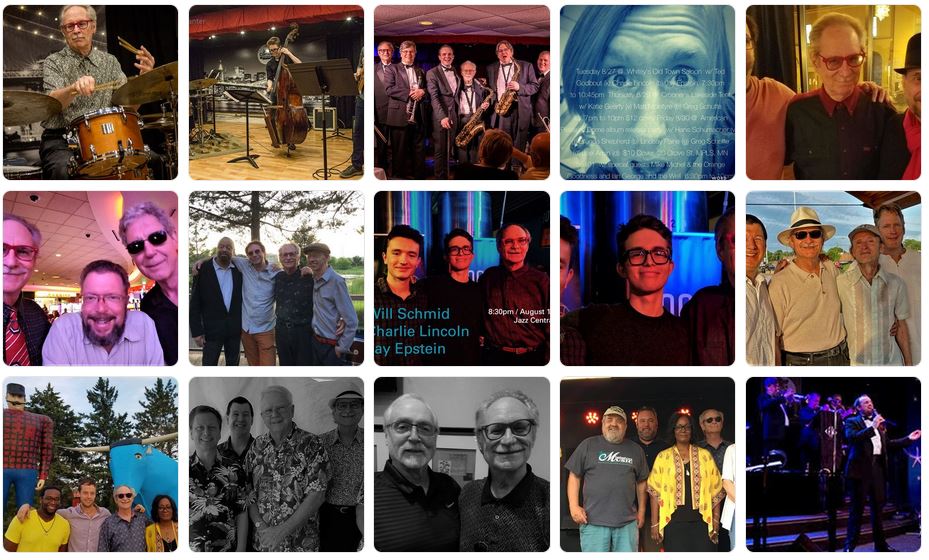 At Winona State Epstein played in the college big band, and performed with rock groups like Tarantulas and New World Congregation. Ironically, his solid reputation as a rock drummer led to an audition with the most popular band in the Twin Cities,The Underbeats. The Underbeats, following the dream, soon moved to Los Angeles, where they changed their name to Gypsy.  Gypsy soon became a mainstay group at the legendary Whiskey A Go-Go, where they shared the stage with groups like the Kinks and King Crimson. As Epstein recounted that period, the flat tone In his voice made it evident he wasn’t all that thrilled with the glamour of rock and roll.

“I learned a lot, playing with Gypsy. They had the work ethic, and rehearsed constantly. But my heart was still in jazz. I spent all my spare time at jazz clubs like The Lighthouse and Shelly’s Manne Hole. I played on Gypsy’s first record, but then it was over. I came back to Minneapolis with the intent of only playing  jazz.”

With his well practiced and elegant style, it took Epstein little time to establish himself as a drummer-worthy-of- hire. He did briefly play with Reality, a pop-oriented band led by singer Rock Robbins, then never looked back.He was soon appearing in groups with the top area’s best jazz performers–Manfredo Fest, Lapis, the Art Resnick Quartet, Dean Granros, to name a few. And he took nightly employment in the jazz trios in local hotels, like the Radisson. It took little time for

Epstein to become a drummer in demand.

“Jay is the most open-hearted drummer I’ve ever played with,” said guitarist Dean Magraw, who currently plays with Epstein in Red Planet.  “He uses every tool in his percussive arsenal to help everyone on stage sound their best, which he does. Yeah, Jay’s got phenomenal technique, but it’s always secondary to his musical spirit.  I love Jay’s drumming and the man himself. I’m always glad-hearted to see Jay on the bandstand.”

The arrival of the 1980s signaled the beginning of Epstein’s water-born Odyssey. Cruise ship duty is a source of lucre for musicians, and it’s lure of steady employment is hard to turn down.  So Epstein hopped aboard and earned his sailor stripes cruising the Caribbean for six years, playing in jazz trios and backing up singers prior to his return to the Midwest. His return was sparked by a problem that had metastasized on the party boats. Drinking is the black lung disease of musicians worldwide, and Epstein makes no secret that he too was stricken.

“I tried to manage it,” said Epstein. “But that proved impossible when you’re confined to those ships and their steady supply of liquor. But I actually managed to quit drinking while still aboard the ships.  I have a photo of myself throwing overboard my last bottle of vodka. I also attended AA meetings in San Juan, Puerto Rico–the rum capital of the world!  And  I managed to stay sober throughout that time.  But I couldn’t continue working much longer on the ships.

As luck would have it, the recuperating drummer returned to Minnesota, and met his future wife, in a zen meditation class. “I was trying to get myself together, and did, but, as luck would have it, I met the love of my life.” They married, bought a comfortable home in Burnsville, where the couple has resided since. Happily married for 33 years.

The only period when Epstein was forced to curtail his furious gigging pace was during the 2020 pandemic, prior to the vaccinations.  Epstein took advantage of the shut-down by setting up a practice room in the attic of his garage. “I can’t play in the house, because my wife’s mom and dad are living with us. So I built a  space in the attic above the garage with practice pads and muffled cymbals.” His eyes widened with the enthusiasm of a child viewing his first electric train.”Now, I’m back to daily practicing. This probably sounds wrong, but this pandemic has actually helped to improve my drumming.”

One discovers while conversing with Epstein, that he doesn’t share the traits of many older musicians, who constantly gaze back to a sunnier past, bellyache over the present, wax nostalgic for earlier glories. Nope. Jay Epstein has no-stalgia. He’s always yakking up the next gig, the next recording, the music he’s digging, or an aspect of drumming he’s o”ut to master. Living in the past just ain’t Jay’s bag. Now enjoying his 76th revolution around the old fireball, he refuses to be bothered with trifles like old age and the ever looming “dirt nap” that seniors obsess about. Nope. Jay’s too busy. He’s got another gig. Tonight, in fact. He’s figuring out which tie compliments his merino wool sport coat, which shirt to make it match. His Gretsch drums are already packed, snug in their cases. It’s a typical evening for Jay Epstein. An evening where he will play–always at his best.

For more information on Jay, his bands, and his upcoming schedule, visit jayepstein.org 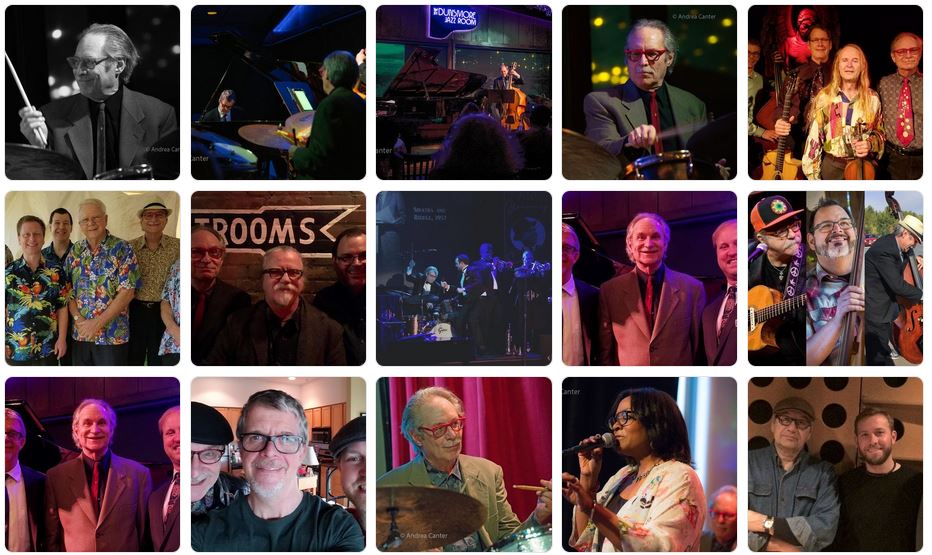